CUDA is a parallel computing platform and programming model developed by NVIDIA for general computing on graphical processing units. We can use it to accelerate expensive computations, distributing the load over several processors. For example, in some zk-SNARKs, we have to calculate a multiscalar multiplication, which involves summing lots of points on an elliptic curve (for example, 100,000,000), \( \sum a_k P_k\), where \( P_k \) are points on the curve and \( a_k \) are positive integers. We can also use CUDA for other problems where the task is highly parallelizable, such as solving differential equations, performing fast Fourier transforms, sorting elements, etc.

CUDA is also widely used in Machine Learning algorithms, especially in those involving Deep Learning. It is also commonly found in game engines, image processing, and simulations for scientific purposes.

In GPU-accelerated applications, the sequential part of the workload runs on the CPU, while processing large blocks of data runs on thousands of GPU cores in parallel. GPUs are optimized to run that kind of work! The overall philosophy is that the different cores run independently the same set of instructions in parallel (The SIMT or Single Instruction, Multiple Thread model).

An excellent introduction to the CUDA programming model can be found here.

In this post, we will focus on CUDA code, using google colab to show and run examples. But before we start with the code, we need to have an overview of some building blocks.

With CUDA, we can run multiple threads in parallel to process data. These threads are grouped in different processing units with their data-sharing and synchronization primitives.

The most fundamental building block of our application is the thread. Threads are then grouped into Warps, which are grouped into Blocks which are finally contained in a Grid.

Depending on our algorithms, warps can be ignored, or be used to further optimize our application, as we will see later.

Blocks are run in Streaming Multiprocessors. Each streaming multi-processor has 8 CUDA Cores*. These cores can also be called Shaders or Streaming Processors.

A busy multi-processor executes a warp, with their instructions running in parallel. Since warp threads are running in the same multi-processor, they can exchange information via Registers in a speedy way. This is useful since, after having our application running in as many threads as possible, the method to improve our performance is reducing memory access.

Now that we have introduced registers, the next question we can ask is how do we share information between warps and between blocks? Let's go upwards through the memory hierarchy.

This SRAM has a double purpose. First, it is used as an L1 cache in a way that is transparent to the programmer. A secondary use is as Shared Memory. This shared memory enables the programmer to share data inside a block in a fast manner.

Since the SRAM has two functionalities, CUDA allows the programmer to define how much of the SRAM can be used as an L1 cache and how much as Shared Memory.

Finally, we have Global Memory. This memory is the one we see in the specifications of graphic cards as GPU Memory and the one allocated with cudaAlloc(). Global Memory allows us to share data between thread blocks seamlessly.

As tends to happen with hardware, operations become more expensive as we move to larger memories. 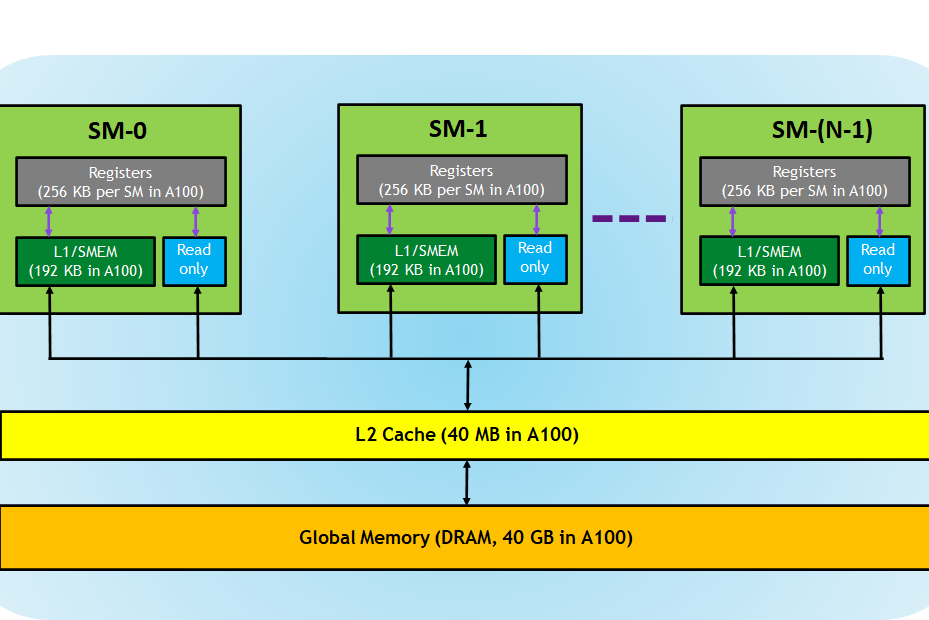 *Nvidia has also released a new kind of cores, called Tensor Cores, for their Tensor Cores GPUs. These cores can run a small matrix multiplication of floating points in mixed precision as a native operation to further optimize machine learning algorithms

We will start by parallelizing some elementary operations and using only global memory. Let's start making a program that adds two arrays.

Before we start, there are some standard procedures we need to do:

Lastly, we need to decide how the blocks are indexed. We can set them to be accessed as a 1, 2, or 3-dimensional array. We are then picking between a typical array, a matrix, or a cube.

It is just an index for the device, and it does not matter. But it is helpful for the programmer to pick something related to the problem being solved. If we add arrays, one dimension is suitable; if we are processing images, 2 is the best pick; and, if we are working with 3d models, it makes sense to use 3-dimensional matrices.

In our case, we will define the following dimensions:

If we wanted a 2d array, we could do

Now, we also need to allocate some memory in our device and copy the arrays we want to add.

Let's assume we want to add two arrays of bytes, array1, and array2, with a size of AMOUNT_OF_ELEMENTS. Then we can reserve bytes for the two arrays and a result with:

Notice we do not need to store the result in a different place if we do not need the original arrays after the addition inside CUDA. And it is common for only one malloc to be used, and then the pointer is indexed with the data's location. But since this is the first program, we will make it as simple as possible.

Now, let's focus on the algorithm.

A simple non-CUDA code to solve this problem would look like this:

If we assume we have one core for each index, we may delete the for and let each thread compute one addition. This is not always the case and makes for solutions that aren't flexible enough. Then, we will need to use strides.

Instead of fixing the stride to one number, we can use CUDA primitives to make our algorithm flexible enough to work with different sizes of arrays and blocks. Our algorithm, using CUDA, would then become:

Here __global__ indicates it's a function that runs on the device that can be called from the host.

blockIdx is the block's id, and blockDim is the number of elements in the block. ThreadIdx is the id of the thread inside the block. Notice then, by doing

we obtain a unique ThreadID, independent of the block, that's useful to split the work.

The stride is defined as the number of threads we have to split the work evenly.

Finally, to call this function from the host, we use the following:

The complete code can be read and run by copying the following google colab. We have also added some examples of a matrix addition to show how the indexing works with more dimensions.

Suppose we call our function in the device from the host; after that, we write operations for the CPU. What happens in this scenario? Is the code run, or does it wait for the device?

To answer the first question, let's take some measures.

We will make a program that does a lot of work over a small array and then retrieve the data in two chunks. And we will also measure the time it takes to call the function to retrieve both pieces.

Since the code is a bit long, we will leave it in the same google colab we used before, so feel free to copy and run it by yourself.

We can see the function call takes almost no time, and the memcpy of the second chunk goes fast too. In the middle of both functions, the first memcpy takes most of the time, almost 1000 times more than the second one! Yet, the operation is the same. What's going on?

The answer is kernels run concurrently with the host, and the program is only blocked when it needs the data. The memcpy is not taking that much time, but it's the first function call that requires the result, so it has to wait for the device to finish.

To make it more evident, we will make use of another primitive:

With this function, all the time is spent waiting for the device, and both memcpy takes the same amount of time.

And knowing we can run code both in the GPU and the CPU simultaneously, we can further optimize our intensive application.

Knowing what happens when we launch a kernel and try to run code locally, we could ask the following question: What happens if we launch multiple kernels simultaneously? Can they run in parallel too? What about memory transfers?

Let's try to answer these questions.

Kernels and memcpy functions run sequentially in their stream. In the case we have seen before, there wasn't an explicit mention of the stream, so the default stream is used.

But, we can create more streams that we can use, using cudaStreamCreate and then assigning the kernels to the new streams.

With this, if one kernel is not enough to fully use the device, we can fill it up with many other tasks that we can run in parallel. If both kernels of the last example used 50% of the device, we would have full occupancy.

Since we have many kernels running, it's a good idea to use the async version of memcpy to start moving data as soon as it comes.

Suppose the computation spends a lot of time transferring data between the device and the host. Async memory transfers can be done in parallel with kernel execution since the GPU supports transferring and computing at the same time.

If you want more examples of this, we have written a complete example in the colab

How do we synchronize work?

CUDA events provide a mechanism to signal when operations have occurred in a stream. They are helpful for profiling and synchronization.

Events have a boolean state: "Occurred" (which is the default state) or "Not Occurred".

The most common way to create, delete and enqueue events are:

How can we make sure that certain events have occurred before continuing execution?

CUDA allows us to speed up expensive calculations by distributing the load among GPUs. To make the best use of these capabilities, we need to rethink how we carry out our calculations, looking for algorithms that can be easily parallelized (such as the fast Fourier transform). In this post, we reviewed the basics of CUDA, what are the threads, and warps and how to manage and synchronize events. GPUs can offer tools to improve proving and verification times in zk-SNARKs, opening the door to many exciting applications. In future posts, we will cover more advanced topics of CUDA.