Let's take the examples of Bitcoin and Ethereum. We see that the history of all transactions is public (which could leak sensitive information on your company's suppliers, acquaintances, or the services you hire). Ethereum offers programmability but requires each node to execute every operation, where the least powerful device acts as a bottleneck. ZCash tackles the privacy problem but does not offer programmability, just private transactions. ZEXE tries to get the best of both worlds:

For an overview of the protocol, we recommend our previous post on ZEXE. As a quick reminder, the protocol offers the following features:

The ZEXE protocol has seen several improvements since its introduction to enhance its performance. This post will analyze the differences between the original protocol and a recent proposal, VERI-ZEXE. The authors of VERI-ZEXE compared their protocol's performance with the original proposal of ZEXE and its early modifications. There are no comparisons between the current improved versions of the ZEXE protocol and VERI-ZEXE.

We mentioned that the ZEXE protocol uses zk-SNARKs, which allow us to provide proofs of integrity for given computations, which anyone can verify much faster than the naïve approach of re-execution. The highest cost of the system is related to the generation of the proof, which relies on elliptic curve operations. You can look at the basics of some SNARK systems in our previous post.

Modern proof systems have two main building blocks: a polynomial interactive oracle proof -PIOP- (which transforms a given computation into polynomial equations) and a polynomial commitment scheme -PCS-. We get different proving systems depending on our choices, each of which has advantages and disadvantages. Some examples of PIOPs are Marlin, PLONK (Permutations over Lagrange-bases for Oecumenical Noninteractive arguments of Knowledge) -and all its derivates- and Spartan. Among the PCS, we have KZG (Kate-Zarevucha-Goldberg), FRI (Fast Reed-Solomon Interactive Oracle Proofs of Proximity), Bulletproofs, and DARK (Diophantine ARgument of Knowledge), to name a few.

To be able to perform proofs in a fast and efficient way, we need "SNARK-friendly" cryptographic primitives and operations. A function is "SNARK-friendly" if its representation as an arithmetic circuit is small. For example, intuitive and straightforward bitwise operations such as AND and XOR have a complex circuit representation. Therefore, the cost of functions in the context of SNARKs must consider the complexity of the arithmetic circuit used to represent the operation and its variables.

A great deal of the cost in SNARK systems comes from:

Research efforts are attempting to solve all of these problems. GPUs or FPGA can speed up the calculation of MSM. New hash functions and encryption schemes with nicer arithmetic circuits can further reduce the complexity of frequently used cryptographic primitives (for example, Poseidon and Vision and Rescue).

To tackle these problems, VERI-ZEXE changes the proving system and cryptographic primitives. Here are some of the main modifications:

The use of PLONK and its additions, together with simpler constructions for cryptographic primitives, results in a reduction of more than one order of magnitude in the total number of constraints, which in turn decreases the scale of the MSM multiplications and overall proving time.

The verification of proofs requires the calculation of costly pairing operations. The original ZEXE protocol used incrementally verifiable computation to prove the satisfiability of user-defined predicates using SNARK recursion: given a computation at step \( N \), the prover would receive the state \( z_{N} \) and a proof \( \pi_{N-1} \) attesting to the correct execution of the previous step. The prover would then execute step \( N \) and generate a proof \( \pi_N \) which certifies that "the new state \( z^\prime \) is the result of the correct execution and that \( \pi_{N-1} \) is true (in other words, that the prover did the \( N-1 \) previous steps correctly)". In this last step, the computational burden comes in: to check the proof, the verifier's computation is embedded inside the prover's circuit, which slows down the proof's generation.

An accumulation scheme proceeds differently by delaying the verification of the final proof to the ledger's validators. At each step of the calculation, the prover receives the current state and an accumulator, which is partially verified (the prover checks that the accumulation results are correct but does not calculate the elliptic curve pairing operation). The group elements in the accumulator must be masked using a randomizer, which acts as an additional witness (secret input) for the accumulator's verifier. This masking ensures that the accumulator does not leak information on the computations being carried out,

Using lookup tables for elliptic curve addition in the Pippenger algorithm and efficient operations for modular arithmetic reduces the number of PLONK constraints by a factor of 6. 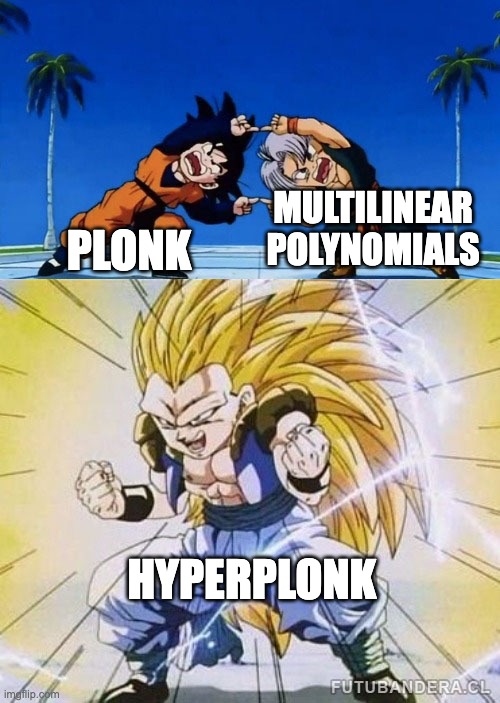 VERI-ZEXE uses PLONK with lookup tables, resulting in fewer constraints and shorter proving times. Two weeks ago, HyperPLONK came out, providing linear time prover and high-degree custom gates. One of the key changes is the shift from univariate polynomials (polynomials in one variable, \(x \), such as \(a_0+a_1x+a_2x2+...a_dxd \)) to multivariate linear polynomials (polynomials in several variables, where the degree of each \( x_k \) is at most one, such as \( a_0 +a_1x_1+a_2x_2+a_{12}x_1x_2+a_{145}x_1x_4x_5 \)). This change avoids using the fast Fourier transform (FFT) for very large systems (with over \(2^{20} \) constraints), which has a superlinear cost (roughly speaking, the FFT for \( n \) points needs \( n\log(n) \) operations). Preliminary studies have shown that this new PLONK version performs better for circuits with more than 16000 constraints compared to optimized versions of the original proposal. We will cover this topic in an upcoming post.

ZK proofs are the key to many new applications, such as decentralized finances, governance, etc. The ZEXE protocol introduced the concept of decentralized private computation, allowing users to run private applications over public ledgers. The original proposal was based on non-universal proving systems, which have efficient performance but require a new trusted setup for each program we want to run. Since then, several significant improvements in proving systems (such as Marlin and PLONK) and new "SNARK-friendly" cryptographic primitives (such as symmetric ciphers and hash functions) have been introduced, resulting in increased performance and lower computational costs. These changes allow less powerful devices to act as provers and run more complex programs.